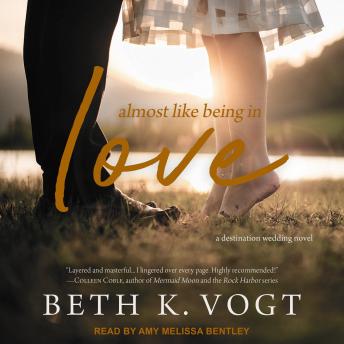 Almost Like Being in Love: A Destination Wedding Novel

Winning an all-expenses paid Colorado destination wedding might seem like a dream come true for some people-but Caron Hollister and her boyfriend Alex Madison aren't even engaged. How is she supposed to tell him she's won their wedding and honeymoon when he hasn't asked her to marry him? After quitting her job, Caron accepts her best friend's offer to visit Colorado. Who knows, maybe visiting the destination wedding site will make a future with Alex seem like a reality.

Kade Webster just landed the biggest deal of his life with his company, Webster Select Realty, participating in the Colorado Springs Tour of Homes. He never imagined he would run into the woman who broke his heart-Caron Hollister-right when his career is taking off. Seeing her again, Kade can't help but wonder why Caron walked away from him years ago, leaving him with no explanation. When Kade learns his home stager won't be able to help with the Tour of Homes, he vaults past all the reasons he should stay away from Caron, and offers her a temporary job helping him on the project.

Spending time with Kade has Caron questioning everything. How can Caron say 'I do' to one man when she's wondering 'what if?' about another?

This book was good. However, It was the most g rated book I have ever read. I’m not a religious person but it had quite a few God references, but it wasn’t over kill.

Way to much God, not anywhere in the description

This title is due for release on May 12, 2020
We'll send you an email as soon as it is available!