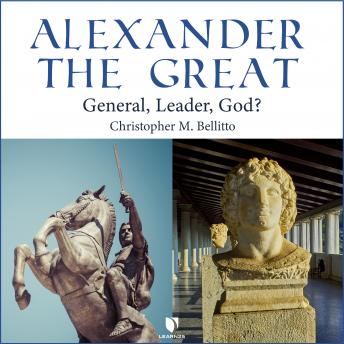 Who was Alexander the Great? Was he a brilliant, ambitious conqueror or a self-obsessed leader who put his men in harm's way? A divine figure or a god in his own mind? In this audio course, join acclaimed historian Christopher Bellitto to explore this famously complex figure

Alexander the Great (ca. 356-323 BCE) was a Macedonian general who brought Greek civilization to the edge of modern-day India. After studying the Iliad, he believed himself to be Achilles reincarnated, imitating the hero of the epic poem in his own military campaigns. Even before he died barely into his thirties, the legends surrounding him were larger than life. In this compelling new audio course, you'll explore the history and lore surrounding this real man and mythic figure, often by consulting the ancient sources themselves.

With Prof. Bellitto, you'll trace Alexander's conquests from Macedonia to Asia, assessing his military prowess and leadership skills along the way. You'll also explore questions about his alleged divinity, his ideas for mixing Greek culture with peoples he overwhelmed, and whether or not he planned to build an empire. Analyzing primary sources as well as context from contemporary historians, you'll discover wildly different accounts of the same events in Alexander's life.

This course is part of the Learn25 Collection.

unreal ..I just wasted a credit on what's not even a dang book... dudes teaching a class... unreal

This title is due for release on November 19, 2020
We'll send you an email as soon as it is available!