The Age of Wonder: How the Romantic Generation Discovered the Beauty and Terror of Science 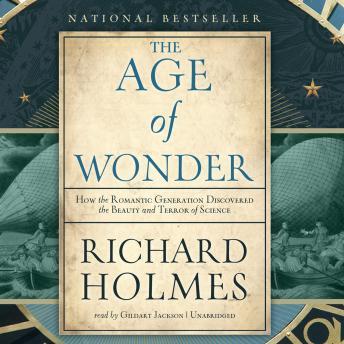 The Age of Wonder is a colorful and utterly absorbing history of the men and women whose discoveries and inventions at the end of the eighteenth century gave birth to the romantic age of science.
When young Joseph Banks stepped onto a Tahitian beach in 1769, he hoped to discover Paradise. Inspired by the scientific ferment sweeping through Britain, the botanist had sailed with Captain Cook in search of new worlds. Other voyages of discovery-astronomical, chemical, poetical, philosophical-swiftly follow in Richard Holmes' thrilling evocation of the second scientific revolution. Through the lives of William Herschel and his sister, Caroline, who forever changed the public conception of the solar system; of Humphry Davy, whose near-suicidal gas experiments revolutionized chemistry; and of the great romantic writers, from Mary Shelley to Coleridge and Keats, who were inspired by the scientific breakthroughs of their day, Holmes brings to life the era in which we first realized both the awe-inspiring and the frightening possibilities of science-an era whose consequences are with us still.

Age of Wonder: How the Romantic Generation Discovered the Beauty and Terror of Science

This title is due for release on June 16, 2011
We'll send you an email as soon as it is available!