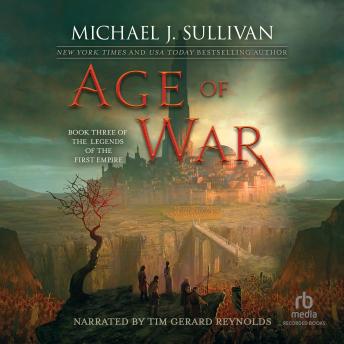 #3 of Legends of the First Empire

Rich in magic and adventure, Michael J. Sullivan's soaring fantasy novels are masterworks of heroism, love, and sacrifice. Now, in the New York Times bestselling Age of War, the epic battle between humankind and the cruel godlike beings who once ruled them ignites in all its fury. The alliance of humans and renegade Fhrey is fragile - and about to be tested as never before. Persephone keeps the human clans from turning on one another through her iron will and a compassionate heart. he arrogant Fhrey are barely held in check by their leader, Nyphrone, who seeks to advance his own nefarious agenda through a loveless marriage that will result in the betrayal of the person Persephone loves most: Raithe, the God Killer. As the Fhrey overlords marshal their army and sorcerers to crush the rebellion, old loyalties will be challenged while fresh conspiracies will threaten to undo all that Persephone has accomplished. In the darkest hour, when hope is all but lost, new heroes will rise ... but at what terrible cost?

Thank you to the author and narrator for another great experience. Great pace, plot and character development. I thoroughly enjoy this series.

Not sure I’m gonna finish this series now that I see Raith will get f***** and Persephone will just …. Whatever though the first two books were good.

Had to pull my car over and finish crying at some scenes. The narrator is amazing.

If you like truly feminine warrior type of books, this series is for you. The women rule.

I have to say this is one of my favorite Authors he has masterpiece after masterpiece this book really should be HBO’s next hit series in my opinion, if you are looking for a captivating series of books this is it

This is another good installment in the age of myth series, however, not as thrilling and captivating as book two. There are a few moments that seem to creep by and I did set this one down more than the previous two. That is not to say it is not enjoyable and I fully recommend this series for any fantasy fan.

This series was great up until the end of this book. I'm so disappointed. :'(

not a great story. on the whole the series isn't very original. lots of Tolkien references. very painful to listen to in spots too. poorly written.

Backbone of the story is good, interesting. But the character arcs are atrocious. By book three character arcs were blatantly shifted to make men look like weak, unintelligent sissies, while the only people who can really get the job done are females. Only females. Just distasteful for me, leaving me decided that this is barely an average read.