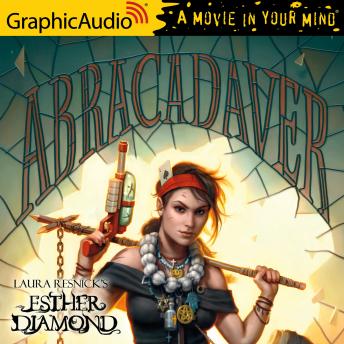 Struggling actress Esther Diamond, whose year got off to a rough start (what with incarceration, unemployment, and mystical death curses), finally catches a break when she lands an acting job.

She's hired to reprise her guest role as prostitute Jilly C-Note on The Dirty Thirty, a TV crime drama about depravity and corruption in the New York Police Department. Esther's ex-sometime boyfriend, NYPD's Detective Connor Lopez, hates that show with undying passion -- especially after Esther convinces her narcissistic co-star to shadow Lopez on the job, in order to add verisimilitude to his performance as a morally bankrupt cop.

But Esther's fellow thespian is her best bet for keeping an eye on Lopez 24/7—and, more to the point, on Lopez's new partner, Detective Quinn. Esther and her friend Max, a 350-year-old mage whose day job is protecting the city from Evil, suspect Quinn of being involved in the latest mystical mayhem to menace Manhattan...

Corpses suddenly aren't staying quite as dead as they should.

While Max and Esther try to determine what Quinn's role is in the supernatural reanimation of the deceased downtown, a dangerous foe with deadly intent changes everyone's dinner plans one cold winter night...