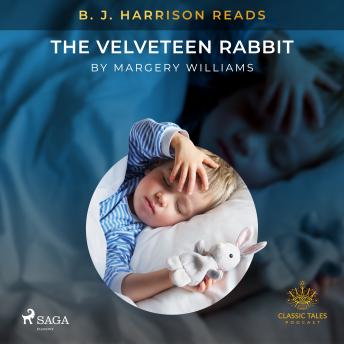 Narrated By: B. J. Harrison

It is Christmas and a little boy receives a gift – a velveteen rabbit. Although the other toys look down on him, the rabbit is happy to be with the boy. They are constant companions and it seems like nothing can worsen their days. But then the boy gets sick and the doctor insists that all the toys get burned because they may be infected. The rabbit as well. Is this the end of their friendship? Or will the rabbit’s dearest wish finally come true?
B. J. Harrison started his Classic Tales Podcast back in 2007, wanting to breathe new life into classic stories. He masterfully plays with a wide array of voices and accents and has since then produced over 500 audiobooks. Now in collaboration with SAGA Egmont, his engaging narration of these famous classics is available to readers everywhere.
Margery Williams was an English-American writer who lived in the period 1881-1944. She is best known as a children’s books author. Her writing career went through several ups and downs but she published her most popular work 'The Velveteen Rabbit' in 1922 and it brought her a wide popularity. The book was so well received that it was later adapted to movies and plays. Margery Williams’ literary legacy consists mainly of children’s books but the latest period of her career showed a different side of her. She began writing about young adults and the social obstacles they had to face. World War II affected her as well and she wrote several works which referred to European history. Despite the significance of those books, she is still mostly remembered for her children’s book which remain incredibly popular today.