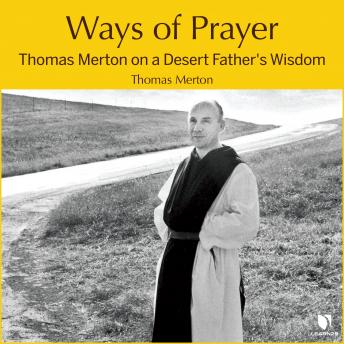 Ways of Prayer: Thomas Merton on a Desert Father's Wisdom

Join Thomas Merton in exploring one of the most influential figures in the history of spirituality. Delivered in 1962 to the novices at Merton’s monastery, these talks allow you to hear his voice and experience his powerful teaching.

Born in the fourth century, Saint John Cassian (A.D. 360 – 435) lived when tensions between the traditional and innovative peaked. A monk and theologian, Cassian made the Christian tradition relevant for the needs of his day in his spiritual works. Indeed, his spirituality remains essential today; he influenced Saints Benedict and Ignatius of Loyola, and his works continue to be read worldwide.

These remastered recordings of his lectures give you the opportunity to discover the vitality of Cassian’s philosophy of prayer with Thomas Merton as your guide. A teacher par excellence, Merton breathes new life into ancient texts as he passes tradition onto novices. Merton’s conferences are not didactic presentations about Cassian’s teachings but meaningful applications of them to the modern world.

Cassian integrated Eastern monasticism into Western thought, and his Conferences provide the principles of monastic life: unceasing prayer, charity, and asceticism. Especially compelling are his teachings about prayer and virtue and his examination of the “prayer of fire” as the goal of contemplation.

Merton guides you through these topics and more in his captivating talks. You will discover why the mysticism of John Cassian is cherished in the monastic tradition and the wider Christian community alike. These conferences will inspire you as you explore your own spiritual life.

This set includes an afterword by Fr. Anthony Ciorra.

Ways of Prayer: Thomas Merton on a Desert Father's Wisdom

This title is due for release on July 20, 2012
We'll send you an email as soon as it is available!