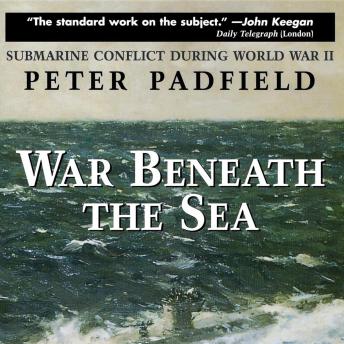 War Beneath the Sea: Submarine Conflict During World War II

Sweeping from the frigid waters of the North Atlantic to the steaming South Pacific, this riveting chronicle of submarine warfare is the first to cover all the major submarine campaigns of the war, describing, in detail, the operations of the British, American, Japanese, Italian, and German submarine and anti-submarine forces.Beginning with a vivid re-creation of the sinking of the passenger liner Athenia by a German U-boat in September 1939, critically acclaimed military historian Peter Padfield's compelling narrative casts an unflinching eye on the devastating consequences of maritime warfare. The often harrowing encounters unfold with urgency and power, balanced by his keen sense of objectivity and perspective.Exploring the full spectrum of the submarine and anti-submarine warfare experience, this brilliantly detailed account pulls no punches. Facts and figures that stagger the imagination are revealed in starkly human terms, and disturbing questions abound. Padfield addresses the controversial issues raised with candor and insight, and the result is not only an impressive achievement but a milestone work in the history of the twentieth century.

War Beneath the Sea: Submarine Conflict During World War II