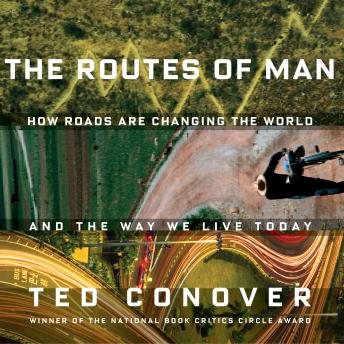 The Routes of Man: How Roads are Changing the World and the Way We Live Today

Roads bind our world—metaphorically and literally—transforming landscapes and the lives of the people who inhabit them. Roads have unparalleled power to impact communities, unite worlds and sunder them, and reveal the hopes and fears of those who travel them.

With his marvelous eye for detail and his contagious enthusiasm, Ted Conover explores six of these key byways worldwide. In Peru, he traces the journey of a load of rare mahogany over the Andes to its origin, an untracked part of the Amazon basin soon to be traversed by a new east-west route across South America. In East Africa, he visits truckers whose travels have been linked to the worldwide spread of AIDS. In the West Bank, he monitors highway checkpoints with Israeli soldiers and then passes through them with Palestinians, witnessing the injustices and danger borne by both sides. He shuffles down a frozen riverbed with teenagers escaping their Himalayan valley to see how a new road will affect the now-isolated Indian region of Ladakh. From the passenger seat of a new Hyundai piling up the miles, he describes the exuberant upsurge in car culture as highways proliferate across China. And from inside an ambulance, he offers an apocalyptic but precise vision of Lagos, Nigeria, where congestion and chaos on freeways signal the rise of the global megacity.

A spirited, urgent book that reveals the costs and benefits of being connected—how, from ancient Rome to the present, roads have played a crucial role in human life,
advancing civilization even as they set it back.

Routes of Man: How Roads are Changing the World and the Way We Live Today

This title is due for release on February 9, 2010
We'll send you an email as soon as it is available!